Veering away from the ‘Rona Madness to finally get around to posting the Camptathalon results from last year.

Unlike 2018, no natural disasters ruined our festivities. Unless you count “snow in May” as a natural disaster, because that did put a little hitch in our giddyup this time around. Our campsite was set to open on the Friday of our camping weekend, three to four weeks later than usual. We had reservations for that night. But a couple of us headed up a night early, figuring if the snow wasn’t going to be a problem Friday, how bad could Thursday be? Turns out the campsite needed the official blessing of the Forest Service to be opened. And we all know that nothing expedites a process like a federal bureaucracy.

But hey, I got to see a tree fall in a forest. It makes sound.

For those of you reading your first Camptathalon Blog, we keep a running log of things said and did. Most are intentionally out of context.

What is Camptathalon? Find out here. 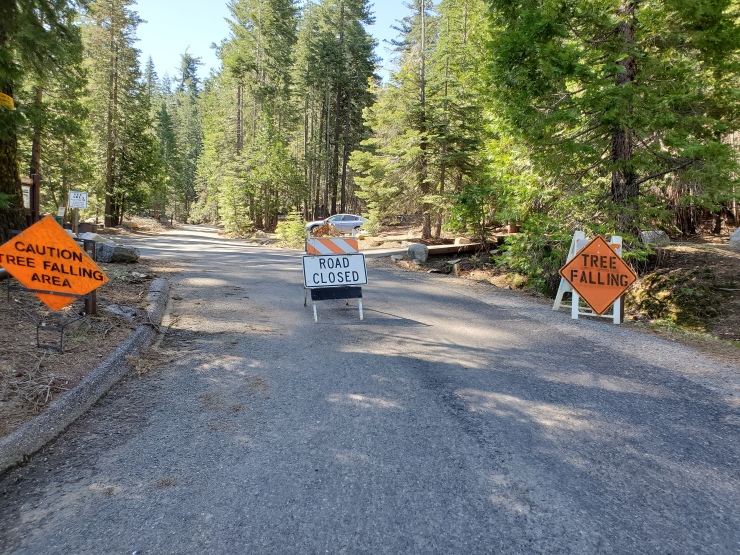 2:49 First sighting of other human beings since we arrived at spot – PG & E Truck
3:20 Water’s fucking cold. Add Polar Bear Competition to Camptathalon? Sparky lasted 37 seconds.
5:30 Relocate to a second site because it has a picnic table and a shitter.
5:50 We fixed your fire pit for you, Forest Service. Is that worth $24?

Friday
6:45 “I brought the coffee grinder because last year you brought good beans and we couldn’t grind them.”
“Oh, I brought ground coffee, because last year I brought good beans and we couldn’t grind them.”
7:40 Shitter’s closed. But the picnic table is nice.
7:50 “I just did something I haven’t done in twenty years.”
“Did you just dig a hole?”
“Nope. I didn’t have a shovel.”
8:40 Pack up camp again. Moving to third site in last twenty hours
9:00 Campsite’s still closed. But the “Road Closed” sign’s moved to the side. Hope?
9:12 Ranger: “It’s still going to be a few hours. I need to look at each campsite. Hopefully I’m done by noon. Please move your cars so I don’t have to come out and explain this to others.
9:22 Filling up ice chests with snow. Saving money left and right.
9:50 Setting up chairs across the street from campsite, like Black Friday shoppers.
9:59 Camp host drives by. “You guys waiting to get in?”
“What gave you that idea?”
10:05 “Hey, Mr. Forest Guy, I’ll give you a Dirty Wookie if you open this place.”
“Which kind of Dirty Wookie?”
(Transcriber’s Note: Dirty Wookie is the name of a beer. On Urban Dictionary, it has a rather different definition. I’ll politely not provide a link.)
10:15 Host and Forest Guy are talking loudly just to fuck with those assholes sitting across the street.
10:22 Host and Forest Guy leave. Sign’s still up.
10:40 Tree chopper arrives.
10:42 “It’s still going to be a while. You guys want to go fish or swim or something?”
“We got nowhere to be, and this is what we’d be doing if we were in our campsite. Except with beer instead of soda.”
10:49 Rick arrives. Now there’s three camp chairs sitting patiently across the street.
10:58 “I won’t reveal the Loser Libation yet, but it is much worse than Bud Ice.”
11:08 Rick has to move his car because it’s in the fall zone. Then they ask him to just block the road. 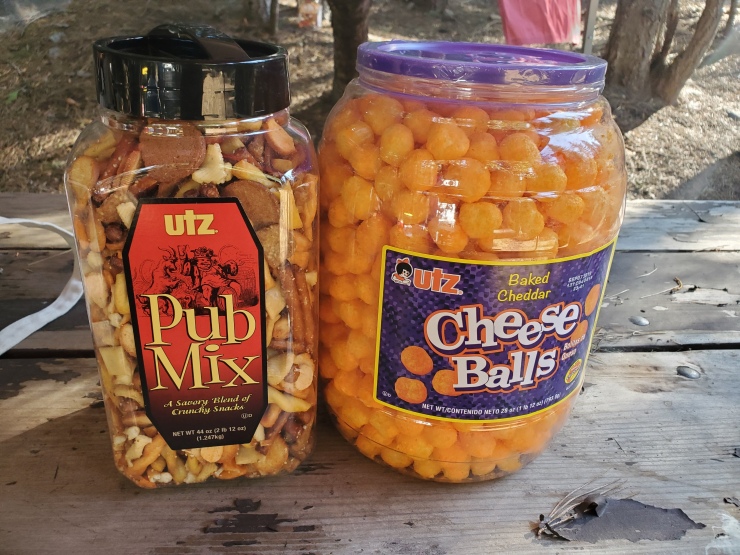 6:09 Concerned that Chris is the favorite for the poker tournament because he hasn’t been drinking since 2:00.
6:10 Official Opening Toast 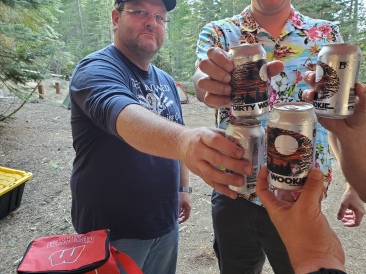 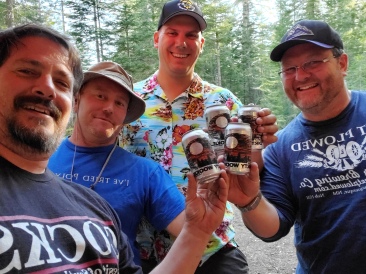 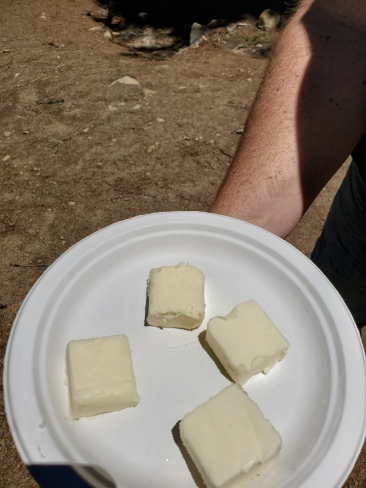 12:46 Standings after second event: Tony with 6 points, everyone else in a 3-way at 4 points.
12:52 We forgot the golf clubs and bocce balls, too, so this might be a very abbreviated Camptathalon.
12:55 Event three: Home Run Derby. 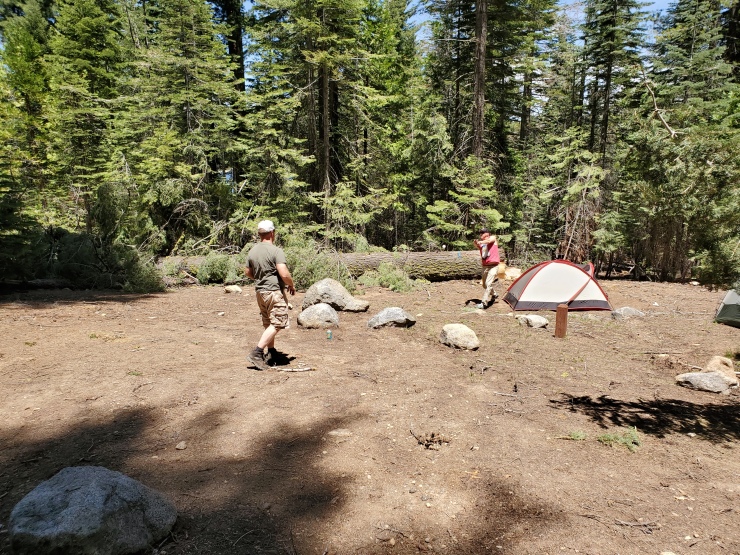 5:56 Tri-tip dinner
9:00 Rick is the unofficial Fartathalon winner.
9:30 Made it past sunset. Calling it an early night.

Sunday
6:21 The flag comes down.
6:27 The Cheese Balls used to mock us when they emerged victorious. Now they just pity us. 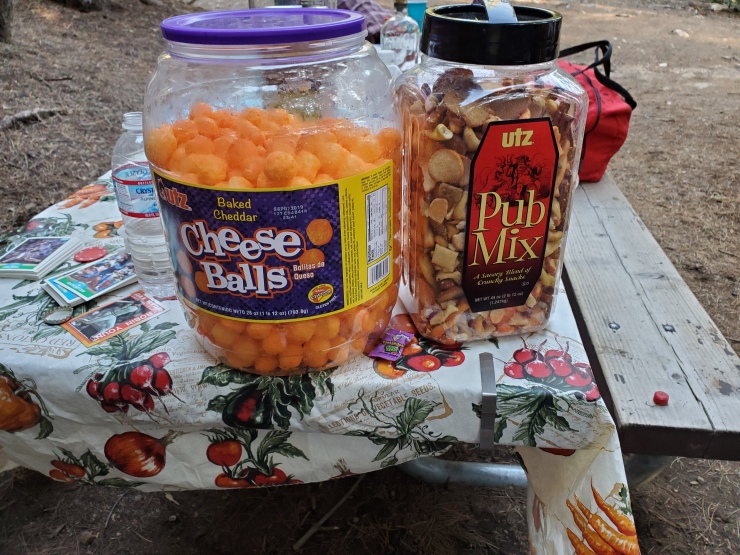 ***No Wookies were dirtied in the course of this Camptathalon***