I went to the outdoor hockey game between the Sharks and Kings this weekend. It was played at the new Levi’s Stadium, home of the 49ers.

I’m going to let that one seek in for a little bit. There was an outdoor hockey game in the Bay Area of California.

Evidently Phoenix in July was booked?

When rumors of the Sharks game came out last summer, the conventional wisdom was the game would be at SBC/PacBell/AT&T/NamelessConglomerate Park, where the San Francisco Giants play. It seemed a long shot that the Niners would allow their brand-spanking new stadium to be tainted by the taints of 70,000 hockey fans. But the mighty dollar sign won out. Especially that number 70,000, because the baseball stadium can only fit about 40,000.

I was going back and forth about whether I wanted to go to the game. One of my friends went to that game at Dodger Stadium last year. He told me that, as cool as the idea of outdoor hockey sounds, and as cool as it looks on TV, the structure of stadiums vs. arenas means you’re much farther away from the action. He said it was difficult to follow the puck at Dodger Stadium.

There really aren’t any bad seats at the SAP Center, where the Sharks play. There are only 17,000 seats and they pretty much go straight up from the ice. But a hockey rink is smaller than a football field (see below), so you’ve got a lot of real estate between the ice and the first seats. I would actually estimate that the best seat at Levi’s Stadium was farther away from the rink than the worst seat at SAP Center.

For this reason, I was hoping they would stick with AT&T Park. While I have issues with a number of things about seeing baseball games there, it is at least very cozy. If the action was far away at Dodger Stadium, how bad would it be at the monstrosity that is Levi’s Stadium?

But another issue had me interested in seeing the game. I mean, aside from the whole “I was there” aspect of seeing outdoor hockey.  I wanted to see Levi’s Stadium and didn’t have an extra $20,000 lying around to buy a Personal Seat License to see a 49ers game. I figured the price for a hockey game would be much more reasonable. Otherwise how would they get 70,000 hockey fans to come to the game?

To be assured of getting tickets, you had to sign up for a Sharks ticket package. Or Niners, because of that whole “Personal Seat License.” Or, surprisingly, the Los Angeles Kings. I opted for Sharks.

I’ve always enjoyed going to games, and every year when the schedule comes out, my wife and I “hmm and huh” about which games we should go to, and what does our schedule look like, and should we see if so-and-so wants to go to a game this year? Then March rolls around and we’re like, “Crap, we didn’t make it to a hockey game this year. Let’s see what stubhub wants for the playoffs. Um, yeah, no, let’s definitely hit a game next year.”

So with the added incentive of getting first crack at the outdoor game, I decided to bite the bullet on a 10-pack of games. Now I’ve gone through six months of “hmm’s and huh’s” about who is willing to schlepp all the way to San Jose with me, and can we secure a babysitter, and holy shit, what time will we finally get back home after that Wednesday night game? Turns out that while I love seeing hockey games, I really hate the ten-hour ordeal of getting to and from San Jose. My wife and friends fall into this boat even more. Maybe that’s why we were only making it to one game a year.

But after plunking down the $1,200 to buy two 10-packs, I was permitted to purchase tickets to the outdoor game. Only two, of course, unless I wanted to buy more 10-packs. This was also the point that I saw the prices for the first time. Holy crap. That whole “they’ll have to lower the price to sell 70,000” mentality was not shared by the front office. The cheapest tickets were $100. The entire lower deck of the stadium was running $400 a seat. Bear in mind these are as far away from the action as a $40 seat to a normal game.

Then we discovered what game time would be. All the outdoor games I had seen on TV were day games. Usually on New Year’s Day, opposite major college bowl games, but hey, if the NHL weren’t crappy at promoting its product, it wouldn’t be the NHL.

But I forgot most of those games were in winter locations. The very first Winter Classic, which started some of the mysticism, featured a light snow falling on the Buffalo Sabres. Majestic.

The Sharks game was at night. Understandable, since the high probably topped 70 degrees Saturday.  In fact, one of the hockey players being interviewed after the second period talked about how hot it was, a fact us Californians scoffed at as we bundled up in the 55-degree “frost.”

Being a night game meant another early morning return home. It also removed some of the public transportation options, which is important because Levi’s Stadium was built with virtually no parking. I f you opt to drive there, it’ll cost you $55 and it’ll take you an hour to get out of the parking lot.

But whatever. One time experience, right? So I ponied up the $200 to buy two tickets, then spent the next six months fully prepared to disapprove of the game.

The result? Not bad. Did the players look like ants? Certainly. But I was able to see the puck and follow most of the action. It was, as one might expect, similar to seeing an NFL game live. Then again, there’s a reason football is a made-for-TV sport. Here was the view from my seat: 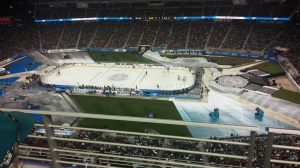 The thing that surprised me the most was the sound. In retrospect, it shouldn’t have been a surprise, because, again, nobody ever talks about the sounds of a football game unless a wide receiver is miked up on TV.  But hockey is usually a loud game. Not just the hits and the slapshots, but the actual skates cutting the ice make an ambient roar that’s missing at the outdoor game.

They put a few microphones around the rink, but coming over the loudspeakers sounded artificial. Depending on how far the action was from the mike, the time delay was almost comical. Plus some shots were very loud, while others sounded distant. Plus that sound of skates on ice didn’t come through.

It reminded me of a music video with the music taken out. I think this was the main reason that the crowd wasn’t that into it. Well, that and the fact that a number of Niner fans were at their first hockey game (I’m talking to you, lady next to me who kept stomping “DE-FENSE” when the Kings crossed the blue line). This might also account for the fact that only four of the fifteen outdoor games that the NHL has played over the past decade have been won by the home team.

The musical guests seemed a bit odd. Hockey intermissions are usually only twenty minutes, but these seemed to be extended by five or ten, so they could have ten-minute long mini-concerts from Bay Area musicians. Completely unnecessary, but whatever. The first intermission featured John Fogerty, who played nothing post-Credence Clearwater Revival. I thought nothing could be less suited for hockey than “Born on the Bayou.”

Then the second intermission came.

Melissa Etheridge came out with her acoustic 12-string guitar as if this was a 70,000-seat coffeehouse. I don’t think she was wearing an earpiece and it showed. It felt like she was screaming to hear herself in a cavernous stadium she’s not used to playing. Her rendition of “Come to My Window” wasn’t bad, but she finished with “Piece of My Heart,” a tribute to Janis Joplin. If by “tribute,” she meant “make people really wish the other person was here instead of you,” she nailed it. I’ve heard karaoke versions better

If you’re going to waste our time with musical guests,  I guess I understand the desire to find Bay Area people, but was this the best available? Was Green Day on tour? Couldn’t they have brought Steve Perry up to lip-sync “Don’t Stop Believin’” like he does at Giants games? I probably would have been more entertained by the corpse of Jerry Garcia.

But all in all it was a good night. The stadium was nice, the remaining public transportation options weren’t bad, and who else in the country can say they saw an outdoor hockey game in a light sweatshirt? I don’t know that I’d spend the $100 (or $400) if they tried it again next year, but I’m glad I’ve had the experience as a once-in-a-lifetime thing.

Even if the ass-dragging that ensued Sunday pushed me beyond my Monday blog deadline. Meh, it’s hockey. Let’s just call this Tuesday post “overtime.”