One more day about my New York trip. Here’s some of the various musings that didn’t necessarily fit into one of the other posts. Some residue, if you will.

And of course, because everybody loves some more giraffe adventures, I’ve put some more of his pictures at the end. Daughter will be so happy!

We  planned on doing something on Staten Island. The Staten Island Yankees, a short-season low-A minor league team, is changing to the Staten Island Pizza Rats on Saturdays this year. And you can walk to the station from the ferry. So I can go to a minor league game when they’re NOT named the Yankees? And the view from the ballpark actually looks pretty nice. Hell’s yeah!

But then Saturday night rolled around and it was threatening to rain and we had just dealt with the 9/11 Museum and an annoying Hop-On/Hop-Off narrator, so we decided to just take the night bus instead. It ended up not raining, but it might have, and that’s enough reason to stay away from the minors. Trust me, I live in Sacramento, and if the high isn’t between eighty and ninety on any particular day, nobody goes to the ballpark. And we’re AAA!

We knew we weren’t going to do the Statue of Liberty, but I figured wife might want some photos of it. Actually, let’s be honest, Giraffe wanted pictures with Lady Liberty. And we had an hour or so to kill between the Tenement Museum and the Mets game, so we figured the Staten Island Ferry was a good, free way to fill that time.

Oh, by the way, I did the tenement museum. It isn’t catered to history teachers.

The Staten Island Ferry was easy as hell to board and ride. I don’t understand why it’s free. I could see it being an extension of the subway, where the same swipe that’ll take you from Flushing to the north Bronx can get you to Staten Island. But I don’t understand how its free. The terminal has turnstiles, so at one point it wasn’t free, but now it is. I feel like things usually flow in the opposite direction.

The angry hop-on, hop-off narrator said the only people who live in or go to Staten Island are mafia. So maybe that’s why it’s free. Maybe now that I’ve ridden it once, someday, and that day may never come, I will be called on to do a service. But for now, the ferry ride is a gift on the day of some daughter’s wedding.

Anyway, with no paying or scanning of cards, the boat arrives, everyone in the terminal boards it, and off we go. Four decks, plenty of room to spread out. Inside, outside, upper deck, lower deck. Doesn’t really matter, it’s a quick trip.

Does come damn near the Statue, though.

And when we got to Staten Island, we got right back on the same ferry for the return trip. We weren’t the only ones. Clearly it’s a touristy thing to do. Did I mention it’s free? All the people that were out taking pictures of the Statue were the same ones taking the left turn in the terminal to put us back in the boarding group. The commuters, the ones who stayed inside the ferry because it was fucking hot outside and why the fuck do they care about some goddamn statue they see every goddamn day on the way to and from work, they all walked straight to the parking lot or the blue line or whatever the hell was going to take them home.

The other fifty of us got right back on the same boat. Not sure why they made us get off in the first place. But they made an announcement that acknowledged there’d be plenty of us barnstormers fucking up their ticket count.

Not that they sell tickets.

The ferry ended up being a great diversion. My only real complaint was that they didn’t have…

You know what? This deserves its own sub-heading

I know I come from the outskirts of Silicon Valley. Okay, maybe not the outskirts, maybe just the general region. But I also travel a lot on this side of the country. Southern California, Seattle, Denver, Portland. And I’m surprised at how much more technological the West Coast is than the East Coast.

I already mentioned a few examples. Hop-on/Hop-off buses requiring extensive line-standing and humongous, awkward tickets. A subway system that only reads cards on the way in, and charges a general fee regardless of how far you’re going. The Broadway tickets still predominantly use willcall or a TKTS system where you have to hoof yourself to a designated area to purchase a paper ticket. At the Mets game, I had to print my internet purchase out at a kiosk instead of using the MLB Ballpark App.

But the most noticeable aversion to technology in New York was the sheer lack of chargeports. Or really, the lack of plugs out in public. If the Staten Island Ferry were, say, ferrying us across the San Francisco Bay instead of Hudson River, I have to assume there’d be outlets at the end of each row of seats. Maybe in between seats, too. On the Staten Island Ferry, however, there wasn’t a damn outlet in sight. Trust me, I looked through at least five rows on all four floors.

Before boarding the Night Bus, my wife and I were trying to get a quick charge on our phones. We already knew the buses had no chargeports, which would be sacrilege in California. What do they expect us to take pictures of all of their fancy touristy things on? Cameras? Which Roosevelt do they think is still president?

So we went to the Starbucks in Times Square. Starbucks always have outlets. Hipsters surfing the web while sipping coffee is pretty much their entire business model. A lot of them even have those cool magnetic wireless chargers. But at this particular Starbucks, there were no plugs in the entire store. Or at least in the customer area.  There WAS one in the bathroom, and there was a guy charging his phone in the bathroom. Because, as we all know, anyone’s allowed in Starbucks bathrooms now. Even phone chargers. It’s just in the REST of the Starbucks where our kind is made to feel unwelcome.

I’m sure this was intentional. If it wasn’t intentional, there would’ve been one or two outliers. I’ve been to those coffee shops before, where all of the customers were huddled around that one particular corner. I’m sure Times Square real estate’s gotta be pretty pricey, and you can’t make those sales if you’ve got a bunch of squatters. But this Starbucks did have round tables, which I presume were for sitting and sipping or meeting friends or having job interviews or whatever the hell else people do at a Starbucks. So the only action they were hoping to avoid was charging of electronic devices. Oh, and maybe they were hoping to avoid some West Coast jackass from blogging about their lack of plugs.

The Sacramento Airport has gone through about five redesigns in the last decade, and each one has added more plugs and charging stations. Often at the cost of seats. But most West Coasters would take a fully-charged electronic device over a comfy seat any day of the week. Because when that battery level hits 0%… Well, life is over, right? You can’t Twitter or Instagram. Or access any of those paperless tickets and plans that you downloaded. You can’t even figure out how to get from where you are to where you’re going without Google Maps these days, can you?

Sacramento Airport also added a stupid monorail in one of its redesigns, but that’s probably a post for another day.

I’m not saying California’s ubiquitous electronic consumption is better, necessarily. Only that I had assumed the rest of the world was on the same page as us. The same lumin-clad e-ink page.

Speaking of New York feeling decades behind San Francisco, what the hell is with the trash-sorting there? Central Park had three, count ’em, THREE, types of trash cans: trash, cans, and magazines.

Magazines? Are those still a thing? Would it have been too difficult to label that last one “paper”? As I just said, there’s a lot more paper produced in New York than I’m used to in the current decade. But I wasn’t sure if I was allowed to throw paper in the magazine bid, so the fifty pages of Hop-on/Hop-off ticket had to go in the garbage. Wouldn’t want to interfere with the, I don’t know, five magazines still in circulation.

And just cans? Maybe they’re hoping by not printing glass bottles, that nobody will bring those to the park. But what about plastic bottles? Every hot dog cart in the Park sells plastic bottles, but we wouldn’t want to update our nomenclature since 1986 or so.

So what am I supposed to do with an apple? No compost? Or how about those cardboard coffee cups from Starbucks or Dunkin’ Donuts? In most West Coast parks, there’d be a more general “paper” option. But I don’t see myself throwing a coffee cup into the “Magazine” bin. By the way, I tried some Dunkin’ coffee because I’ve heard so much raving about it. My verdict? Meh.I’ll take a Philz or a Temple or a Blue Bottle, thank you very much.

And yes, I know many of our trash bins can be confusing. You see people standing in front of the multi-colored facade for five minutes, staring back and forth between the rubbish in their hand and the fine-hair splitting signs in front of them. I stayed at an airbnb in Seattle where we were informed that we’d be charged extra if the owners or the city had to resort our trash. Eight college grads with at least four advanced degrees, and we spent damn near thirty minutes debating what to do with the cellophane wrapping around the butter.

I only hope that they pay people to sort the trash after it’s been thrown away. If not, I never want to hear a New York politician talking about me not doing my part for the environment. 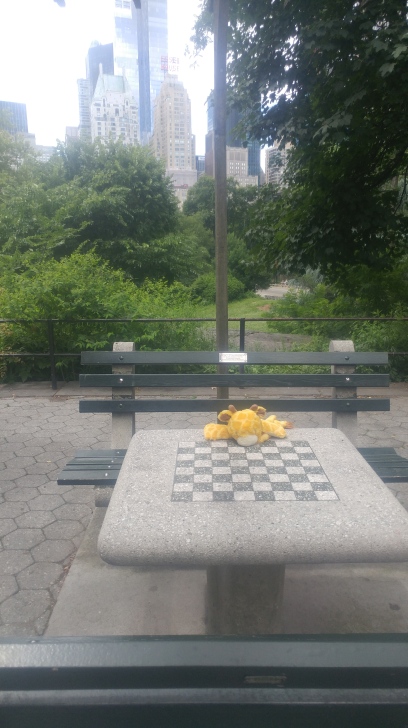 Nobody was willing to take on the powerhouse that was Giraffe at Chess. 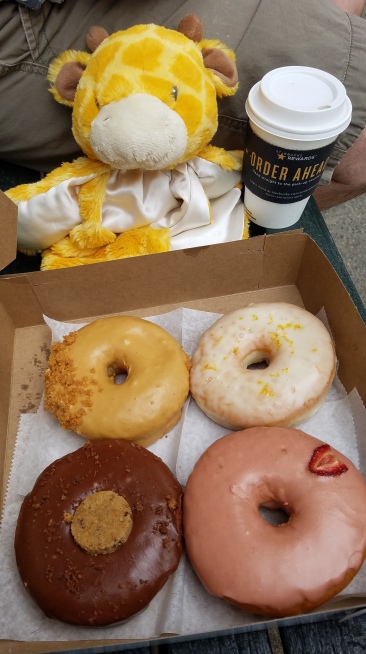 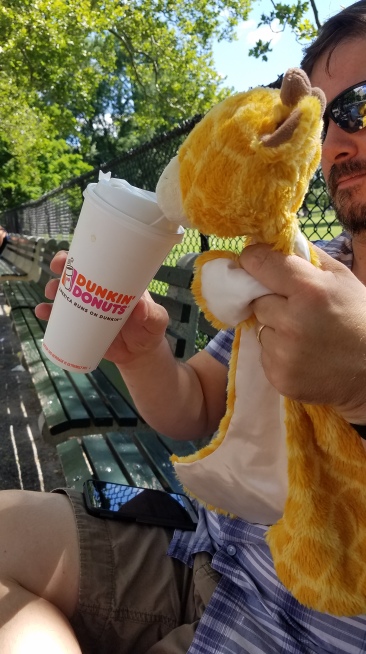 Donuts, donuts, and more donuts. And what better thing to do with donuts than eat them in Central Park? Picture number one was of the fancy donut place that didn’t open until 8:00 AM. The second was Giraffe being singularly unimpressed with this Dunkin’ Donuts coffee he’s heard so much about.

I don’t quite understand this sign. Plus two points for blocking the intersection? Is there some New York driving RPG where you have to gain experience points by driving poorly?

And finally, since my very first blog post was about Sharknado 2, I couldn’t resist reenacting one of the most quintessential scenes from the cinematic masterpiece. Unfortunately, no giant inflatable bat. And no Sharknado.