Part II of my Hawaii trip. You can read Part I here.

Oh, and quicker turnaround means there’s probably more typos, less brilliance. Assume everything wonderful is legit, anything not hilariously entertaining must be a result of a harsh self-inflicted deadline.

Alcohol:  This vacation hasn’t been nearly as teetotaling as I had feared.

Fortunately, Kona Brewing Company has a wonderful lunch menu that I was able to sneak past the scrutinous eye of the non-drinkers. Seriously, everything looked wonderful. Roasted garlic, by itself, is enough to get my juices flowing, but when you combine it with a Gorgonzola cheese dip, and my breath’ll be smelling goooood for the next fortnight. And that was just the appetizer. For my regular course, I opted for a porterhouse dip (which had peppers and onions, so it was half-Philly, half-French dip). I then took bites of everybody else’s food. Even my daughter’s mac & cheese. I would go back there ten times if I could.

But of course, the reason I suggested this particular lunch spot on our foray into Kona was for that vital second word in its title: Brewing. I knew there would be a brewery in Kona, because a few of their beers, notably Longboard Lager, are quite prevalent in California. Some of their lesser varieties, like Fire Rock Pale Ale and their coconut porter, are easy enough to come by, too. They merged their distribution with Red Hook and Widmer a decade or so ago, increasing all of their geographical footprints. And of course, the beers with the most name recognition must be the best,right? Like Budweiser.

Anyway, I started with a sampler. Gotta keep my options open. One of the reasons you go to a brewery is to try some of their less-known flavors. And if my in-laws don’t realize that four 5-oz beers actually add up to more than a pint, who am I to mention it? And of course, after I do the sampler, I need to buy a pint of one of them, right? It’s an unwritten rule, like at wine tasting. If I don’t, isn’t that tantamount to stealing? The fact that the sampler cost as much as the pint is irrelevant. It’s about principle!

I actually used the sampler to try one of the flavors I’ve seen for sale in California, but never been curious enough to buy a 6-pack of: the coconut porter. I like coconut (more on that in a future part), but don’t really care for porters. Or stouts, for that matter. I’ve tried a few of the newfandangled flavored dark beers, like chocolate porters and coffee porters and oatmeal stouts. They always end up tasting much more like the porter or stout than they taste like chocolate or coffee or oatmeal.

The Koko Brown at Kona? Wow. Coconut. Like, seriously coconut. Almost, and I shudder to say this, too much coconut. Think of how hoppy an 80 IBU India Pale Ale is, and the Koko Brown is that coconutty. When I get back to California, I won’t be opposed to buying a 6-pack of this particular flavored porter. It might take me six months to go through the six-pack, but at least now I know I won’t be dumping five of them down the drain. But I doubt I’ll ever drink two of them back-to-back. It’s intense. If I want a beer, I’ll grab a beer. I’ll grab this one when I want a coconut.

The best part of our trip to Kona Brewery was the growler shop. Mother-in-law decided she wanted to take a growler home to one of the cousins that does work around her house and likes being paid in beer or beer-related paraphernalia. She thinks a growler with the Kona Brewing Company logo on the side would be a perfect gift for him.

“If we get one, do you think you could drink all of the beer in it before we have to board the plane?”

Yeah. Yeah, I think I can accomplish that. I’ll have to buckle down. But what is family for, if not for sacrifice?

March Madness: Did you know there’s a little basketball tournament going on right now? The college bouncy-bouncy types (Or “Dribblers” as Laura Ingraham, who surprisingly is NOT the same person as Dr. Laura, would put it) are engaged in their postseason.

I’m a bit of a degenerate gambler. Probably more on that at a later date, not in this “Hawaii” strain. Maybe next March. Yeah Wombat, that’s how you get them coming back for more – tell them they have to read through a year of your drivel before any sort of payoff.

Wait, does that mean we have to read through another about one of your crappy inside-joke-laden camping trips before learning of your gambling habits?

Normally, I would not be in Hawaii this week. I would be in Reno betting on the games. I usually go there with a group of friends. But every four or five years, my wife makes me opt out of the debauchery that is 48 hours of solid drinking and basketball games to make a proper Spring Break with her. A decade ago, we went to Italy. Five years ago, it was a Caribbean cruise. Look for my next live-blogging, tropical experience in 2023!

Unfortunately, the NCAA didn’t adjust their schedule for me. So March Madness went on, and most of my friends are in Reno right now. I am not. We exchanged these pictures yesterday morning: 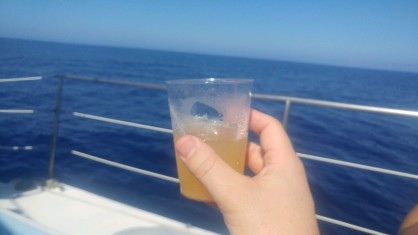 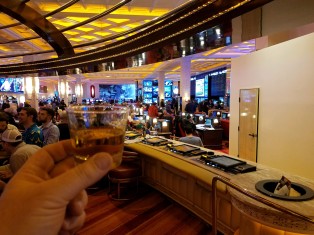 Ninety percent of the people would prefer to be in the picture on the left. It definitely has its merits. But man, I’d be lying if I didn’t say there’s some lonely pangs in my heart at that neon-bedazzled bastion of destitution on the right.

At least I was able to give a little cash to my buddy before he left. Or at least, I would have if transporting money across state lines for gambling purposes was legal. So of course, none of these things actually happened, and all of these wagers were made for “entertainment purposes” only.

But let’s just play pretendsies and claim that I went 4-0 on two two-team parlays on day one of March Madness. Had I got my last two bets texted across four thousand miles in time, I would’ve gone 6-0 and been up over a hundred… um… “points.”

Throughout my history of betting March Madnesses, I usually do well one day and poorly the other. Never 6-0 well, but had I been in the actual sportsbook today, that 6-0 would’ve turned into a 9-3. It’s amazing what happens when you don’t imbibe in free drinks at the sports book all day. Then again, had I been present, I would have gotten that Michigan-Buffalo two-teamer in.

Based on my history, if I was a smart man, whether in Reno or in Hawaii right now, I’d take the $50 I’m up and not do a damned thing with it on Day Two.

So anyway, what was I saying? Because I would be a fool not to bet on a sure thing like Virginia over UMBC.

(Okay, set this to post 12 hours from now and just assume nothing I just said looks foolish by then.)

In-Law Shenanigans: Every family has certain dynamics that are hard for outsiders to maneuver. In my wife’s family, there always seems to be decisions made without discussion, because they are all comfortable with each other. I feel like we’re discussing one thing, and then a mutual decision is reached by all others present that did not even to be on the table at all.

It’s a universal phenomenon. My wife says the same thing when decisions are being made in my family.

A couple of things yesterday seemed a bit odd from my outsider perspective. The day before, we were at the beach when a group of people showed up to board the whale-watching catamaran, which gave us the idea to book it. On Day Two, we had to go back to that same beach to board that same boat. Instead of going back to the same parking lot as before, wWe drove around for ten minutes looking for a spot to park.

When I finally piped up with “Aren’t we going the same place as yesterday?” I was informed that father-in-law is certain there is a closer parking lot. First spot we checked was gated, second was along the side of the road next to lava rocks that looked none-too accessible. Two u-turns and a few turnouts later, and we found the elusive parking lot that was down at the other end of the beach. The walk was to the beach was about the same.

After whale watching, we stayed on the beach. Mother-in-law walked back to the car for her swimsuit and toddler’s beach toys, at which time she decided to… drive over to the first parking lot.

After the beach, we decided to get lunch on the way home. Daughter fell asleep as soon as she hit the car, which limited the options of where we could go to lunch. Of course, we had plenty to eat at the condominium, what with our grocery store and Costco and Target runs we made on Day One, but wife’s family seems to have a “lunch out, dinner home” policy, whether it fits the logistics of the day or not. So we decided to get some take-out home with us.

I assumed we were going back to the food court that we had gone to the night before. There were six or seven options there, so we could all get something different from the night before. But instead, we went to the golf course clubhouse. With child sleeping in the back of the minivan, I was sent inside to see if they even do takeout and, if so, to take a picture of the menu. They do, and I did. We sat in the car, passing my phone around to look at the menu, complete with father-in-law reading each item, including all of the individual ingredients, to mother-in-law, all while the car is running to keep the air conditioning going.

I’m getting ready to go back inside with everyone’s order, when mother-in-law puts the car in gear and drives home. I was very confused, but wife and her family don’t bat an eye. We get back to the condominium, call in the order, then mother-in-law drives back to pick it up. An hour after I was salivating over the burrito that I had passed on at the food court the night before, I sat down to eat some lackluster golf-course fish n’ chips. No malt vinegar. Guess I should’ve added that to the phone order.

[…] III of my Hawaii trip. You can read Part I and Part II if you want. But you aren’t missing much context by starting at the […]