So, Jesus’s best friend was a rabbit that fucked a chicken, right?

‘Tis the season when an organization that promotes celibacy usurps a bunch of springtime fertility symbols. Just keep your peep shows to the marshmallow type, buster.

As I mentioned during Saturnalia (what the pleebs refer to as Christmas), I understand that advertising for Christianity’s got to be a little difficult. Back in the nineties, I was annoyed when those “Got Jesus?” bumper stickers started popping up. I thought it was bush league. Maybe Christianity can’t pay the same as Madison Avenue, but isn’t the cause of all inspiration supposed to play for your team? The best you can do is steal somebody else’s ad campaign?

Well, at least there aren’t any commandments against theft or anything. Moses couldn’t be bothered with intellectual property and copyright law.

But I’m a little older now, which might (Might!) mean I’m a little wiser. I kinda get it now. Advertising for any of the various Christian faiths has got to be tough.

“Think you’re a good person? Come in and find out why not.”

“Limited time offer: Join during Lent and give up meat on Fridays!”

So I’m a little bit more lenient toward religious advertising these days. But I was still a little taken back when I saw this: 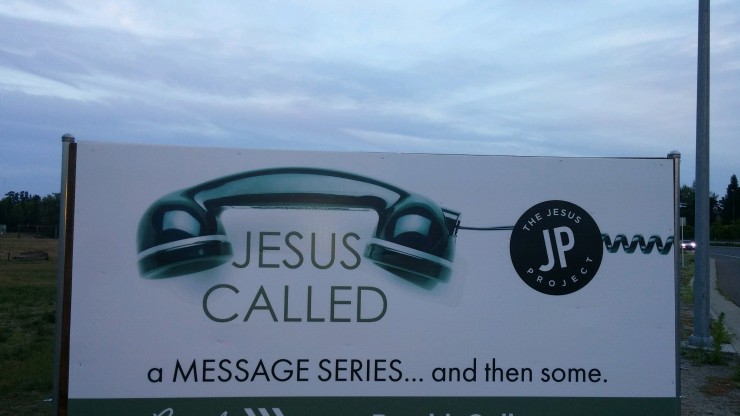 This fills me with a lot of questions.

I live and work in a pretty high-Latino area, so my first thought on seeing this sign was to read it in Spanglish: Hay-zeus called.

So my first question is: Is this a landscaping issue?

Or is my student calling me about the homework assignment? And if so, can’t he e-mail me?

I’ve noticed that, in my classroom, Jesus seems to be the only Spanish name that nobody anglicizes. Pablo? “Call me Paul.” Jorge? “It’s pronounced George.”

But I’m still waiting for the first “It’s Gee-zus, not Hay-zeus.”

But with this sign, seeing as it was outside a church,  I assume that the Jesus who is calling is Mr. Christ. But this doesn’t stop the questions.

Actually, the first question is the same, regardless of if it’s the Savior or my student. Why is Jesus calling? Can he not e-mail me instead?

Maybe Jesus was illiterate. It would fit His position in life. Not sure how many carpenters in the conquered territories of the Roman Empire could read or write. Maybe that’s why everybody else had to write down what He said.

Okay, so e-mail is out. Too bad, Jesus. There are some great websites I could’ve directed you to.  (You or you? Do I capitalize You when I’m referring to Him in the second person?)

Okay, so no e-mail. Jesus is calling me on a landline. It’s not even cordless.

Is this a money thing or a technology thing?

I can’t imagine it’s about money. There’s plenty of cash coming in to the Christly coffers on a regular basis. Just ask Tammy Faye Bakker – she was big right around the time Jesus bought that phone. I’m pretty sure Jesus wouldn’t have to pay taxes, either. Partly because He’s a non-profit, but He also seems to have every politician in his pocket. They invoke his name even more than the oil companies and unions, and you know those two groups don’t have to pay for shit.

So it’s about technology. Jesus is opposed to modern contrivances. I guess that makes sense. Idle hands, and all that. Maybe he subscribes to the whole Protestant work ethic. Sorry, Catholics.

But still, this advertisement suggests that  Jesus DOES still own a phone. So some form of instant communication is acceptable. As long as it’s analog.

But when, precisely, did Jesus gave up on technology? If the advertisement had shown the telephone chassis instead of just the receiver, I might be able to decipher if He lost hope in the 1950s or the 1980s. According the the Republicans, those were definitely the last two time Jesus loved America. But which one? Does Jesus strike me as a guy who takes the time for rotary dial? Or has He at least allowed for touch-tone technology?

Regardless, it’s clearly either computer or wireless technology that the Savior has problems with. I don’t know which, but I can maybe make an argument for each. Wireless travels through the ether. Maybe that’s where He lives. It goes back to the whole Copernicus issue. If Earth goes around the sun, then where is heaven? And now we know the answer. Heaven is where radio waves reside. Marconi was the one that killed him, not Galileo.

So I get that you’re opposed to most modern form of communication.

But the problem with calling on the landline is that it’ll probably just go to voicemail. Nobody answers unknown phone numbers anymore. If you really want to get ahold of me, maybe try texting instead of calling. I know that brings up the whole literacy thing again, but honestly, you’ve had a couple of centuries to learn. You really only have yourself to blame.

Regardless, I am at least comforted by one fact. If you’re still using a landline, you won’t know about call waiting yet.

So sorry, Jesus. I heard you were trying to call me, but I must’ve been on the other line.

[…] see, unlike my previously favorite advertisement which was based on the premise that Jesus abhors mobile technology, the new sign makes me feel […]